Table of Content
Social Arithmetic is amazingly trivial!
The basic model has only one parameter and three variables.
1. Calculating an Individual Social Index:
ISI = smart*honest*active
with conditionings:
(a) if ANY of the multiples/factors is equal to ZERO the whole product is ZERO.
(b) if ANY (or two, or all three) of the multiples/factors is negative the whole product is negative.
2. Calculating the Compound Social Index:
CSI = the sum of all ISI for all individuals living in the Country

In 2016 in America CSI was slightly negative.


The next model should include the fact that peoples’ actions are not just positive or negative, but may point in many different directions, hence they are vectors.

The updated model has one parameter, two scalars, and one vector. 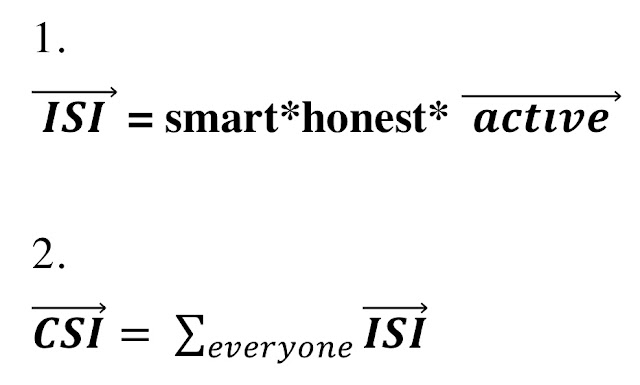 In this model, the resulting direction of the evolution of the country may have progressive as well as regressive components.
In particular, this model explains why many strong but opposite political forces can cancel each outer and lead to nowhere, but many relatively week but aligned forces can generate a sustainable movement in a specific direction.
Conservatives (and dictators) use this model when coordinating mass media to influence peoples’ minds (mind manipulation, brainwashing).
Liberals are too busy with pushing individual agendas that their actions almost neutralize each other (for example, watch this short video).


P.S. my shortest post so far; demonstrates the role of mathematics!
By Dr. Valentin Voroshilov at August 24, 2018