A word of advice to Mark Zuckerberg:
“You are not Steve Jobs, and that’s a good thing.” 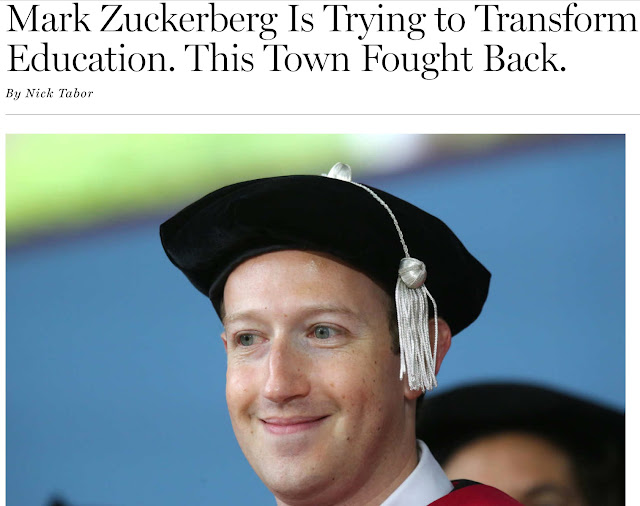 http://nymag.com/intelligencer/2018/10/the-connecticut-resistance-to-zucks-summit-learning-program.html
They called it a “personalized learning”.
But in reality, it was an animal training; a dressage, so to speak.
Parents know that's not what education is about.
Parents know that’s not what education is.
Parents get it.
Mark Zuckerberg don't.
I understand that he wants to establish himself as an innovator in education.
But the problem is he is just not an innovator. Innovating ideas is just not his strong suite.
The idea of FaceMash was not his (or not just his). But he wrote the code for that.
The idea of Facebook was not his (or not just his). But he wrote the code for that.
That is why he has no intuition about innovative ideas.
He is a technocrat.
As such, he likes to talk to other technocrats, he feels himself comfortable with them, he understands their language, he shares their views.
For example, all technocrats think of humans essentially as of robots (an example of a conversation with one of them: http://www.cognisity.how/2017/04/AIforEDU.html).
A technocrat does not spend much time on thinking what makes a human human, what is the nature of human nature?
Technocratic approaches to education are not new. But they have never worked. And never will. At least, until robots will become almost indistinguishable from people (function-wise).
The question is how a technocrat can innovate in such essentially human human practice as education?
As everyone else, in order to move ahead, Mark Zuckerberg needs to accepts himself the way he is. He needs to embrace his technocratism. But he needs to find people who can aid his “no idea” side.
In 5 to 10 years Mark Zuckerberg may begin having his own intuition on innovative ideas.
To speed up this process, he may start reading something outside of his box.
I would recommend to start from:

Mark Zuckerberg is not Steve Jobs.
And that is a good thing.
Steve Jobs was not a technocrat, he was an artist. But as such he would never become the richest person in the world.
Bill Gates did.
Jeff Bezos did.
So, Mark Zuckerberg is in a good company.
He just needs to accept it.

Want to learn more about the author?
Click here to see the proof of my professional success.

"Students protest Zuckerberg-backed digital learning program and ask him: ‘What gives you this right?"
From https://www.washingtonpost.com/education/2018/11/17/students-protest-zuckerberg-backed-digital-learning-program-ask-him-what-gives-you-this-right/?utm_term=.4b0415d5e59c
I would like to ask, too.
A Question. To Facebook​, To Facebook Education​ To Mark Zuckerberg, to Priscilla Chan, to all the old and new tech entrepreneurs jumping on advancing education: why do all of you treat students as robots and teachers as animals (or v.v., or both)?
Is that how YOU were treated, too?
You would love to spend hours in front a monitor so you think everyone else will love it, too? What's your deal? Well, besides getting lucky with having billions. Note, not the real dollar bills, though, just pieces of paper which potentially (!) cost so much. So far.
Try to read this, for starters: "A word of advice to Mark Zuckerberg: “You are not Steve Jobs, and that’s a good thing.” at https://www.cognisity.how/2018/10/mzuck.html.

I  am not an idiot or a reckless person. The reason I can allow myself writing what I think, even if that is perpendicular to commonly adopted and conventional views, is that my financial situation is sufficient and stable. Of course, as a normal person, I wouldn't mind making more money, or being involved in more interesting projects (as described in my generic resume). But I do not have to pretend to be someone I'm not to make my living.
By Dr. Valentin Voroshilov at October 11, 2018