What’s “wrong” with the new definition of a kilogram. 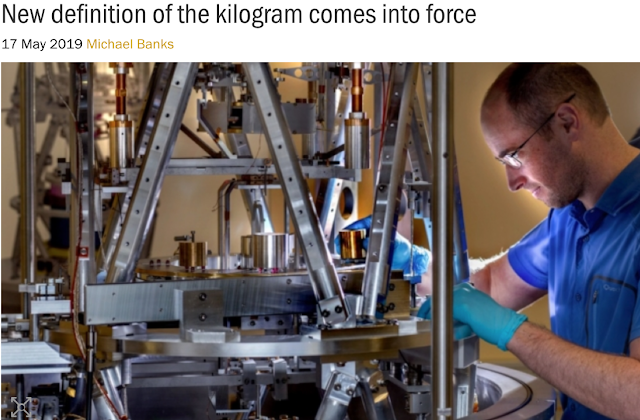 From Wikipedia: “the kilogram is currently redefined in terms of the Planck constant as approved by the General Conference on Weights and Measures (CGPM) on 16 November 2018.”

The same page provides the timeline of the evolution of the definitions of the unit of mass, that for many people for many decades was known as a kilogram.

But neither Wikipedia, nor other popular or scientific sources (e.g. here; or here) do not tell us the significance of the change that happened in 2018. They all focus on accuracy, on how much more precise one kilogram can be defined now than before.

So, they knew that if one takes an empty cube (or a sack), and fills it up with dense material, it will be heavy, and that was treated as “a lot of mass”. Using contemporary terminology, we can say that (without realizing it) people used two definitions of mass:

(b) mass = weight / (the acceleration due to gravity)

In general, mass represented the amount of matter, and eventually, as a standard for that amount people used the amount of water in give volume (e.g. in one cubic decimeter, a.k.a. 1 L).

The actual standard have been changing, but the meaning of it was kept the same.

Until Newton changed it.

Before Newton, mass represented the amount of matter.

After Newton mass started to represent the amount of inertia.

To explain the meaning of mass before Newton, a teacher would have to demonstrate the fact that different materials have different density, and that when you pack more stuff in the same volume, the density and the mass (i.e. the amount of material) are proportional.

After Newton, the explanation of the meaning of mass has become more elaborated and more abstract.

We need to start from making a statement that if we would have one object (of any nature) in an empty space (for example, outside of the earth, far away from everything else) that object could have been found only in the state of rest or a in the state of a simple and continuous motion. If it would be moving, then it would be moving along a straight line traveling exactly the same distance in the same time.

Of course, I just paraphrased the first Newton’s law.

The mass or the size of the abject would not make any difference. They all would remain at rest or would travel with constant velocity (here we would have to provide the definition of velocity and explain what does term “constant” mean).

Then the second Newton’s law comes into a play.

We state that we can change the state of an object by applying to it a force (for example, by touching it). And then we observe that the state of that object changes, meaning, its velocity changes: the object may start slowing down, or speeding up, or its path begins bending (not a straight line anymore).

In the universe, nothing happens instantly – every change takes time. This is the universal law of nature.

And we observe that law in acting when we apply a force to an object that previously was at rest or was moving with a constant velocity.

We observe that velocity changing gradually.

But we also observe that how fast that change happens depends on the properties of objects.

Specifically, the rate of change of velocity depends on how light or heavy an object is.

The property of an object to keep its own state was named “inertia”.

And the mass has become the measure of that property.

To explain the meaning of mass, we can state now that if we apply the same force to two different objects that initially have been in the same state, it will take more time for a more massive object to acquire the same change in its state as the other object.

Of course, I just paraphrased the Newton’s second law.

To explain the new, Newtonian, meaning of mass, a teacher would have to go through all the steps I just went through, but with more details, more examples, and, of course, with actual experiments.

That was not an easy task, but at least it was doable.

The new definition of one kilogram cannot be explained using any clear and understandable means; it is reachable to only scientists well versed in physics – in several different areas of it.

For the rest of folks, it is basically: “Trust me, it works”.

Don’t believe me? Try to read this piece from Physics Today(BTW: one of the best on the matter).

So, what should a teacher do now?

I can only share what I did this summer.

I went through exactly same explanations I used before the new definition was accepted, and added only one sentence, that today we have a new, more accurate definition of a kilogram (of course, I talked about mass and energy, and quantum properties of matter, but that was at the very end of the second semester, weeks and weeks after we covered the Newton's laws).

Based on my student evaluations, that went well.