Why Did Russian Cyber Forces Beat Their U.S. Adversaries in 2016?


Why Did Russian Cyber Forces Beat Their U.S. Adversaries in 2016? 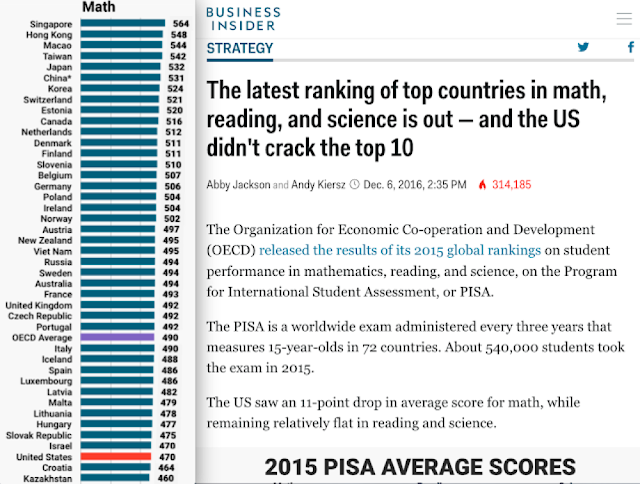 
P.S. It is no secret that secret that the world is an arena where many countries compete with each other for political domination (like kids compete on a playground for friends and better toys). Intelligence services play an important role in that competition.

P.P.S. In a case you don't want to read about Russia, maybe you will read a piece on China? “Chinese children crush Americans in math thanks to a mindset Americans only display in one place: sports” (by Libby Kane; 2017)

Let's start from a simple statement: every game has two teams involved in it; hence, when one team wins and another team loses that says something about both teams.

Also, it is worth to mention the fact that for many decades the U.S. have been trying to influence political changes in many many countries in the world, including the USSR, including the use of the media available at the time. And in any country the general state of the intelligence forces reflects the general state of the governing.
And the last general statement is about Vladimir Putin. He not just blames America for the dissolution of the USSR, he hates America for that with all his hart and he will always hate it, and he personally will be doing everything he can to get back at America for that.

The question “Why Did Russian Cyber Forces Beat Their U.S. Adversaries in 2016?” is related to the answer to the questions
“Why eleven World Chess Champions came from the USSR/Russia and only one came from the U.S. (https://en.wikipedia.org/wiki/World_Chess_Championship)?”
It might not seem obvious, but the answer to both question is the same, which is: “Because Americans do not value intelligence (a.k.a. intellect)”.
Just Google “Americans values”. The list would always include things like freedom, entrepreneurship, persistence, practicality, generosity, and others, but nothing related to “being smart”.
The highest recognition a smart person can have is to be called a “geek”, or a “nerd”, which stands for “a harmless idiot who helps a “school king” or a “school queen” with his or her math homework”.
I know that this is an exaggeration, which however is not too far from the realty.
Statistically speaking, three hundred million Americans should have twice more smart people than one hundred fifty million Russians.  But we didn't  see that in 2016!
Does it mean Russians are smarter than Americans?
The answer is – no!
The difference is not in the people.
The difference is in the approaches the two governments choose towards the youth preparation.
During the time of the Soviet Union Empire, almost every city and town in Russia had at least one chess club, funded by the government. Chess matches of various ranges, starting from a middle and high school levels, were a common place. Almost every paper and a magazine had a chess section. If sports like a football and a hokey were naturally popular, the popularity of chess had been promoted by the government.
In 1975 Russia’s TV launched a show called “What, Where, When?” where a group of six people, called “knowledgeables”, had to solve a number of problems (the number varied from a dozen to a couple of dozens, depending on the script). To solve each problem “knowledgeables” usually had one minute; during this time they could have a discussion to reason toward the solution, and then had to provide their answer. The show quickly has become very popular. Since 1986 the show is being translated live (https://en.wikipedia.org/wiki/What%3F_Where%3F_When%3F).
A similar show was launched on ABC in 2011, but was canceled after the first season.
American popular shows like “Jeopardy” or “Who wants to be a millionaire” do not require any reasoning; they based solely on the ability to memorize a large number of facts.
Many Russian movies have a character whose internal reasoning is presented to the audience. One of the most popular mini-series “Seventeen Moments of Spring” regularly depicts a Russian spy analyzing various scenarios. In American movies even “geeks” do not think, they just already know what to do (lately, however, some companies have launched criminal TV shows where some analytical work is being presented to the audience).
The difference in the approaches the two governments choose towards the youth preparation leads to the difference in what the youth considers to be “cool”, and in the end to the difference in the youth preparation.
Because the society in general does not value logical reasoning (or at least does not demonstrate that it does), schools are not required to promote it as well, and school teachers are not required to use methods leading to the development and advancement of logical abilities of students.

FYI: In Russia ALL middle-school students take physics 2 one-hour classes each week three years in a row (in 7th, 8th, and 9th grade); and then take physics again in high school (in 10th and 11th grades). I firmly believe that America must adopt the same approach.

Why Did Russian Cyber Forces Beat Their U.S. Adversaries in 2016?


=> The Answer Is Rooted In The State Of Education!

Some links on the matter:
What Would Businesses Do if No Foreign Students Could Come In the Country Anymore?
Who and why should learn physics?
How much of the NSF funded “fundamental” scientific educational research is really fundamental?
What does it mean to be "smart"?

Afterword:
There are at least two versions of the famous quote
“Every nation has the government it deserves.”
“Every nation has the government which it is fit for.”
https://en.wikiquote.org/wiki/Joseph_de_Maistre
http://www.quotecounterquote.com/2010/01/every-nation-has-government-it-deserves.html
I would like to offer a modification.
“Every democracy has the government which is as smart as the most of the people”.
© Valentin Voroshilov (Nov. 2017)
That is why good public education is crucial for a democracy.
That is why everyone who is against good public education is automatically against a democracy, hence against the Constitution of the United States.
And BTW: For many decades the CIA, the NSA have been trying to steal Russian technological secrets. The most important "secret" they missed to steal is Russian school programs, syllabi, textbooks.

On June 15 2017 Jeff Bezos twitted his request for ideas:   ( https://www.irishtimes.com/news/world/us/what-should-i-do-with-my-billions...