A word to Senator Sanders, and other anti-Trump warriors.

A word to Senator Sanders, and other anti-Trump warriors. 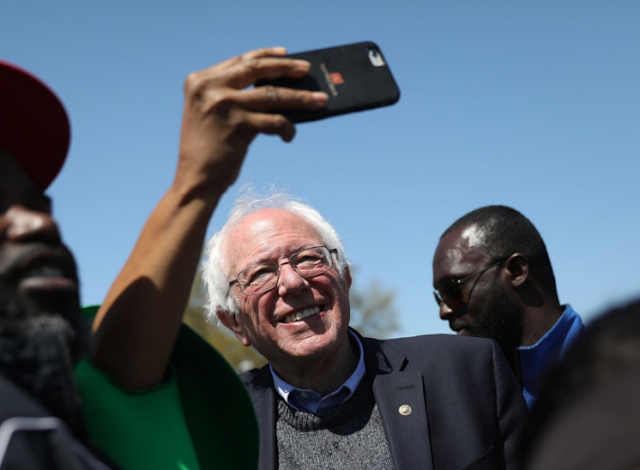 For those who prefer listening to reading, a video or audio copies of this file are also available (but beware of the accent!):
mp4 (video) file
mp3 (audio) file

Hi everyone,
I’m Dr. Valentin Voroshilov.
The pictures in the video have no relation with the words you hear, it could have been just a black screen.
You can just read the piece online, or listen to an audio file.
I hope you liked my joke, but if you didn’t see it on Twitter, you’ll find it at the end of this piece.
I am not a politician and I will never be, because I have no charisma. Charisma is an ability to say trivial things in such a way that people would feel, like it's been a revelation.
Since I’m a teacher, when I say trivial things they sound trivial.
However, I have a talent. I can make complicated things look clear, even trivial.
I can do it in math and physics, and I hope in politics too.
Today I want to share some thoughts about 2020 elections.
I don’t watch or read, or listen to news regularly anymore.
But based on what I see or hear, democrats will not be able to beat Donald Trump in 2020.
It’s not that they couldn’t.
In principle they could, but they just are doing it all wrong.
They focus on things that do not matter for people who do matter.
There are people who will vote for a democrat no matter who it will be.
Those people do not decide the elections.
There are people who will not vote for a democrat no matter who it will be.
Those people also do not decide the elections.
People who will decide the election - again, are people who are on a fence.
Those are the people who voted for Trump in 2016 because they hated to vote for Hillary Clinton.
They wanted to vote but they did not want to vote for Hillary, because she represented the establishment.
And millions of Americans did not believe anymore that American establishment cared about them.
That is why they voted for an anti-establishment candidate.
And that is how they will vote again in 2020.
Of course, the strongest anti-establishment and anti-Trump candidate was and still is Bernie Sanders.
But even he does not focus on the things that matter the most, or does not do it in the best way.
If I were Bernie’s adviser, I would tell him to say this.
From this moment forward I am not Valentin Voroshilov anymore, I am Bernie Sanders.

OK, now I'm back; I am Valentin Voroshilov again.
And I want to ask all other Democratic presidential candidates - do you really think you can win?
Because if you really think you can win – you are delusional and you do not deserve any support.
But if you are not delusional, that means you know that Bernie Sanders has the best chance to beat Donald Trump.
And that's the only thing that matters in this election.
You have to ask yourself, what is more important for you - the future of your country or your big ego?
And if it's the former, if the future of your country is more important for you than your ego, you have to quit your race. And you have to start working for Bernie Sanders. And you have to ask all your supporters to do the same.
This is not the first time when I see how a rogue politician hacked the political system of a country. I saw it before, in a different country, in a different time, when Boris Yeltsin became the president of Russia.
Yeltsin was a drunk; Donald Trump does not drink alcohol.
However clearly he acts like someone who has some signs of dementia.
Boris Yeltsin has led to the rise of Vladimir Putin to the Russian Throne.
If Donald Trump will be re-elected, there is a big chance that the next American ruler will also be Vladimir Putin.
Of course, I don't mean it literally; of course, this is a metaphor.
Democratic party has to prove to everyone that it is indeed a Democratic party, that it has democracy inside itself, that the party is not ruled by the party establishment; that regular folks are not peasants who do what the establishment tells them to do. Democrats have to prove that the majority of them are capable of thinking for themselves.
Democrats have to prove that they have their own will and will not allow super-delegates to steal their nomination - again.
Bernie Sanders’ supporters need to infiltrate rival campaigns and every time when they have a chance, the need to press the candidates by asking them a question - are you for the country or for your ego? if you know that you cannot win, why do you keep working against Bernie Sanders?
By keeping yourself in the race you're helping to re-elect Donald Trump.
By staying in the race, you are becoming a Donald Trump’s operative.
There is nothing personal in this statement, this is just a scientific fact from a political s science.
If Donald Trump will be re-elected you will be personally responsible for making this happen by not quitting the race and not supporting Bernie Sanders from the beginning.

The joke:
Every time when I see, or hear, or read what our politicians, or TV pundits, or political analysts say, an old joke comes to my mind. 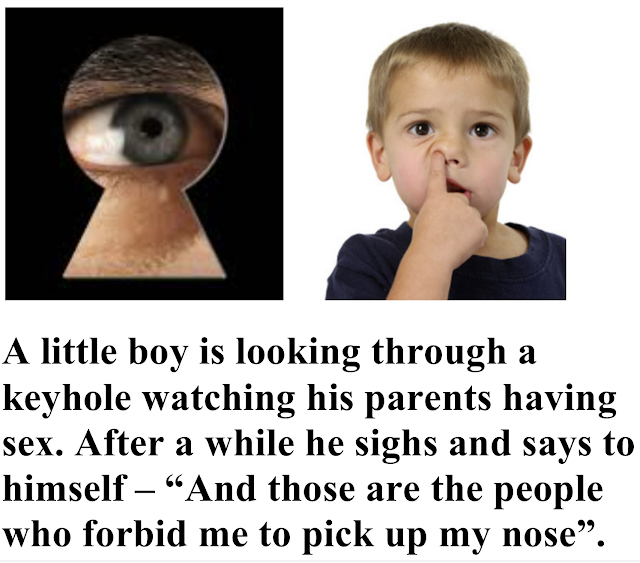 Now I would like to add my two cents to the debate about “party unity”, “censorship”, “Facebook rude posts”, etc.
The more debates take place the better.
Censoring posts on the ground “I disagree with it”, or “this makes me feel bad” only leads to pushing people out of THIS place of the debate, but not out of the debate.
People will not stop thinking what they are thinking, but will find other venues to express it (for example, by voting for Trump).
In the long run, that is exactly what we need these days – we (democrats, progressives, liberals) need to get separated ("give each other a space"), give time to different groups to get a better, clearer understanding of who wants what and who is who, and what they really want. Then those different factions, groups, "cliques", would be able to find a common ground.
To the advocates of censorship "because it will cut fake news" - (a) if you cannot see which news is fake, you should not go into politics; (b) if you are afraid that people would be influenced by fake news you should offer your counter-opinion; (c) make sure that for you "fake news" is not just something "I don't like it".
At some point, everyone will need to make a decision: am I BY the movement, or IN the movement (does not depend on what movement)?
BY the movement means – providing types of support – verbal, monetary, etc.
IN the movement means – allocating a certain amount of time on various political actions. Among those actions; #1 is educating themselves on the laws governing social changes (of course, only if you want to make some social change to happen).
For better or worse, Karl Marx’s “Das Kapital” became the theoretical foundation of many social revolutions.
For a "progressivist", the theoretical foundation is “Saving Capitalism” by Robert B. Reich.
Read, think, discuss, plan, act.
Or - don't like the books I offer? - offer another book!
Yours (and mine, and many of us) tweets and Facebook posts do NOT represent a solid logical theoretical foundation for the actions needed to do "Our Revolution" (or ANY revolution).
Let us be clear – without deep understanding of the true reasons for the country getting to the current social, political, economic state, the fate of any movement (all movements) will be the same as the fate of the “Occupy Wall-Street” - gradual decline and dissolving.
Bernie Sanders said “It wasn't that Donald Trump won the election, it was that the Democratic Party lost the election”
(http://www.cnn.com/2017/03/31/politics/bernie-sanders-elizabeth-warren-boston-rally/).
BTW: he said it five month after the election day; I said the same right after it (https://teachologyforall.blogspot.com/2017/04/clinton.html), but the difference is – no one cares what I say, Bernie’s every word gets scrutinized from right and left.
After Sanders said it, there is no turning back. Now everyone inside and outside of the Dem Party has to express his or her position toward the statement: agree, disagree, not sure - or ignore it (acting like he has never said it).
Arguing about the meaning of this statement is just useless.
This type of a statement cannot be logically proved or disproved; it is a belief-based statement - like "aliens/ETs/UFOs exist". One can say that the universe is so vast, and there are signs of aliens visiting the Earth, so they exist. Or one can say there are no facts (bodies, objects, machinery) proving the alien existence, hence they don't. But in either case - it is just a belief.
Politics needs knowledge and logic; political actions need time, effort, and SLOGANS! 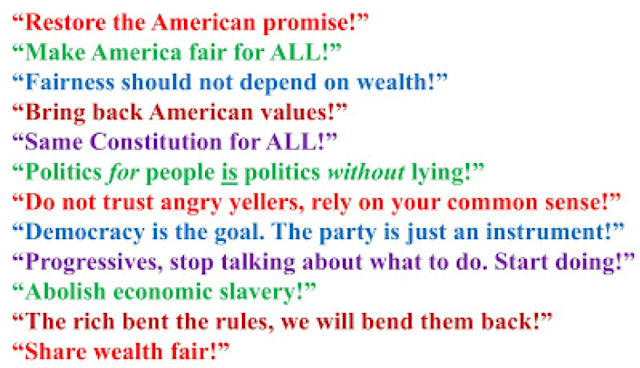 An ice cube in a freezer remains an ice cube as long as it remains in a working freezer. What will happen if one cuts the power cord, or just opens the door and keeps it opened for a long time? Ice turns into water (hopefully, no one has any doubts about this). This is just an example of how external conditions, a.k.a. environment, affect properties of a system. It works for any system and any environment.
Four words:
globalization,
computerization,
robotization,
world-wide-web-ization
describe the drastic change in the social and economical environment of all countries in the world.
That is why all countries now are "melting".
What will they turn into?
(a) no one really knows
(b) everyone has a chance to push it in a direction one likes - and eventually the melting of social and political structures will take the new stable form.
What form?
No one really knows.
Can be ANYTHING (democracy, fascism, you name it).

For more on politics, please, visit the page titled Politics.
I would recommend to start from:
"Why Didn't I Win", by Elizabeth Warren (2020)
and Why does Seth Moulton run for the President and what does it say about the Democrats?