American suicide, or “the road to hell is paved with good intentions.” 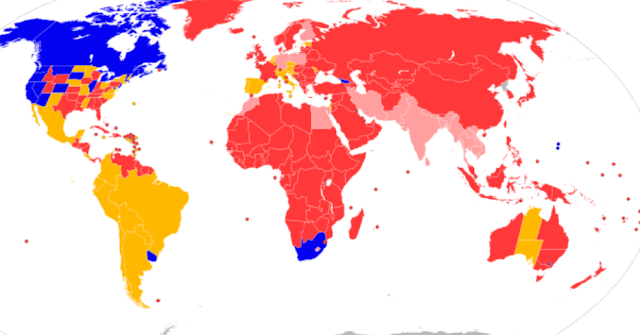 I am writing here about legalization of drugs in America.

Or, rather, about how it’s being done.

I want to say upfront, I am against bringing criminal charges to people who consume drugs just because they consumed a drug.

The law does not prohibit consuming alcohol and does not even set any limit on how much can be consumed. But if a drank person or a person who wants to become drunk brings some damage or harm, then the law punishes him or her.

The exactly same legal approach has to be used to ALL drugs.

And now America needs to decriminalize consumption of all drugs, starting from marijuana.

One may say – but that is exactly what is happening right now!

Twenty-six states, 2 territories, and the District of Columbia have legalized recreational cannabis. One state (Oregon) legalized the use of hard drugs.

The problem is when the Prohibition ended, no one was promoting drinking as a good life style.

On the contrary, many media outlets and media personalities present smoking marijuana as a cool activity, natural for, and even expected from “cool people”.

There is a huge difference between “decriminalization” and “promotion”.

That is true. Although, technically, these facts are NOT related to consumption of marijuana per se, they are directly related to the way the police and the criminal system work. Instead of decriminalization of drugs politicians could have been initiating the police reform. For example, making sure that all events of the illegal position – for non-white and white Americans, equally – would be prosecuted in exactly same manner. Or, by enlisting more non-white policemen and making those policemen to patrol predominantly white neighborhoods.

But I also understand the reality. I know that my suggestions are not realistic. That is why I have no objection to decriminalization of consumption of drugs.

But I have a strong objection to promoting that consumption – in any way (starting from movies).

On the contrary, the process of the decriminalization of consumption of drugs must be happening in parallel with the process of  an active denouncement of any drug consumption. Money needs to flow into the support and promotion of anti-drug movements.

“Using is a danger for your health!”

“Using is not cool!”

Unfortunately, what I see today is the opposite of that.

In result, I see (or rather feel, i.e. smell) a greatly increased number of people smoking marijuana – even while driving.

Smoking marijuana has to be regulated as smoking in general, because it affects other people, too. When someone drinks, it does not affect the health of other (unless the drunk is driving, or psychotic). But fumes travel in all directions, and a smoker puts in danger people around him or her.

But most importantly, drugs represent a threat for the health of the nation as a whole.

As I wrote, I know the reasons for the strong push to support the legalization of marijuana.

And I believe that the number one is money.

There are people who have a lot of money and look for the ways to make even more. They want to open another venue for their investments. Marijuana can become a billion-dollar business. And those people do not care about any negative effect legalization of marijuana may have on the society. In fact, they have a strong interest in promoting marijuana as much as possible.

Hence, it is the people who care about the future of the country who have to step up.

Or America will be slowly killing herself.