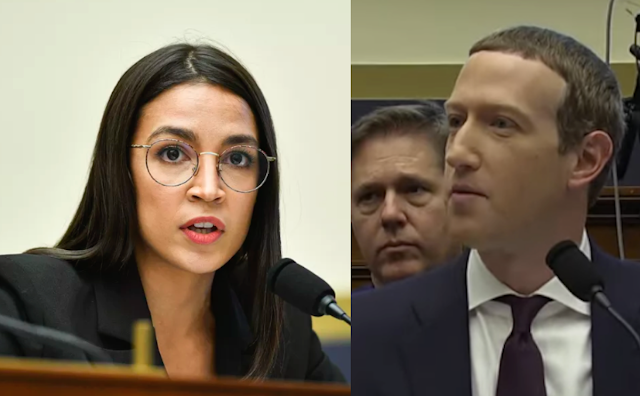 Before I make a statement I want to make, I want to stress that my statement is no reflection on Harvard v. Boston University, or men v. women, or anything else.

My statement is just a fact: during the hearing before the House financial Services Committee on October 23d, Mark Zuckerberg presented more intelligent arguments than White House Representative Alexandria Ocasio-Cortez presented her questions or statement.

And anyone who is familiar with my blog, knows that I am not a big fan of both – Facebook and Mark. My main page offers some insights on what I think about them:
But, as the saying goes, every rule has an exception. 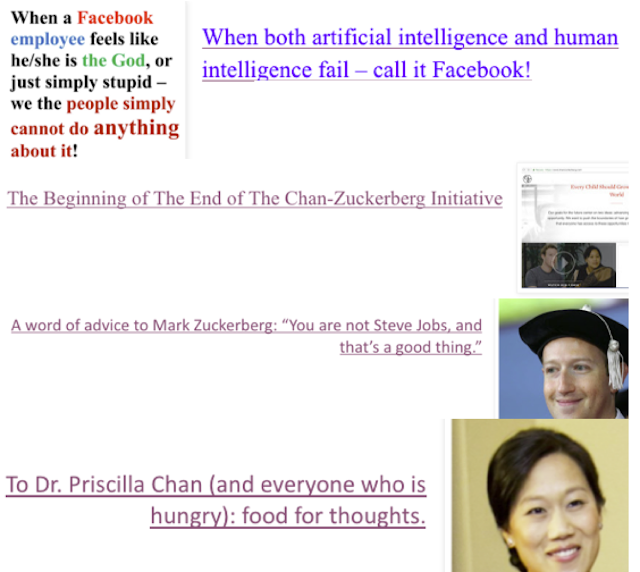 * When both artificial intelligence and human intelligence fail – call it Facebook!
* The Beginning of The End of The Chan-Zuckerberg Initiative
* A word of advice to Mark Zuckerberg: “You are not Steve Jobs, and that’s a good thing.”
* To Dr. Priscilla Chan (and everyone who is hungry): food for thoughts.

In the hearing Mark was smarter than many of the people who asked him questions.

And that is a sad realization.

It brings back to my memory an old anecdote.
A little boy is looking through a keyhole at this parents making love. After watching for a while, he turns away, sighs, and quietly says to himself: “And those are the people who forbid me to pick up my nose”.

This hearing, on the top of everything else happening on the Capitol Hill, makes me to sigh and quietly say to myself: “And those are the people who define my life”.

Just another proof of how deeply American elite has degraded over the last thirty years (e.g. The Degradation of The White Male American Elite; BTW: one of the reason Why Americans are Starting To Lose the World Race for Prosperity?).

Let’s start from defining (giving a definition to) what Facebook is.

That is what lawmakers should have done years ago. But they didn’t. So, at least for the hearing, they should have set a provisional definition. The simplest one would be making Facebook a media platform. Now, we would need a legal definition of a “media platform”, but that is also absent (thank you – lawmakers!). 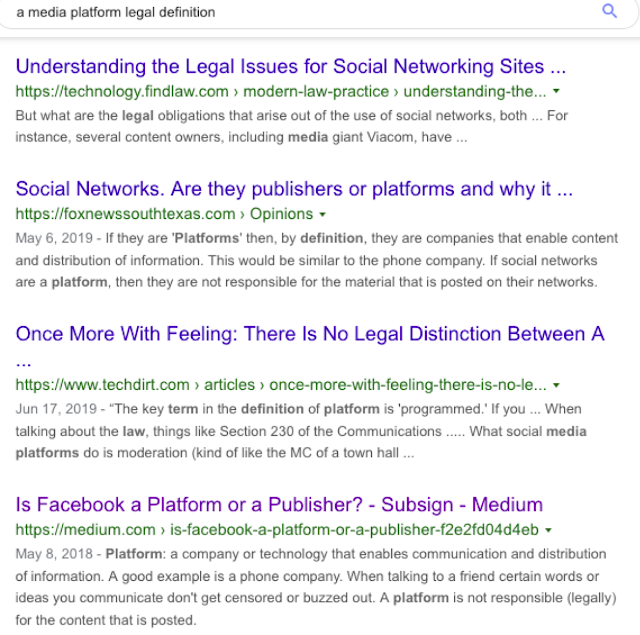 There is a consensus, however, that a media platform is “a company or technology that enables communication and distribution of information”, as opposed to a publisher that “qurates and distributes the content” (quotes are from this link).

Neither a platform nor a publisher creates content they enable or qurate – they are not the authors of that content. Are they responsible for the quality of the content?

The general answer is – NO. The authors are responsible for that.

Of course, as the saying goes, every rule has an exception. Platforms and publishers should ignore, reject or eliminate some specific content that is forbidden by law; for example, a hate speech. But that’s that. They do not have to do anything else.

They could. They just don’t have to.

A publisher has a right to select or not to select a content to be published. No one can force a publisher to publish a book, for example, or a song, or a movie, etc.

A platform is a private enterprise, and has a right to establish its own rules regarding the quality of the content. For example – no rules (beyond required by the law).

The right to free speech protects all – authors, publishers, platforms – from being censored (within the limits established by the law).

That is exactly what Mark said.

That is exactly what Alexandria fails to understand.

Her questions meant to tell us that Mark is a businessman who defends his business (what a revelation!). And for that, for the money – she implied – he had thrown the American Democracy under the bus – figuratively speaking.

Alexandria, your (or your advisers') knowledge of ... whatever it is - is deep, indeed.

“Facebook helped Trump to get elected by placing money above democracy and truth!” – that seems to be the common sentiment.

Anyone who believes that without Facebook everything would go differently in 2016, including the outcome of the election, is delusional (or a liar). The effect Facebook had on voters was dismal. It was not zero, but it was insignificant (BTW: the same is true for Brexit). The number of people who were moved by Facebook adds is (a) insignificant, and (b) should be relatively the same for both sides – on the left and on the right, so the effects basically neutralized each other. “Cambridge Analytica” didn’t do something so new and inventive that no one could predict or recognize it. And there is no law against targeted advertising. It does not matter if anyone thinks that it was wrong to do. Maybe. But it was not against any laws, besides privacy issues, which is irrelevant for this discussion. And if it was not against any laws - whom should lawmakers blame for that?

Yes, Alexandria, Facebook uses an algorithm to estimate who is the most susceptible to what adds to push those adds. But – who doesn't? This is how all advertisement and marketing agencies make money. Of course, if you do not like this – adopt a law that forbids pushing any political adds – make them random. Don't like this idea? You want your adds would not be restricted, because they are truthful. Only untruthful adds have to be blocked – right? Well, with the same result you can dream that all people would be educated, honest and nice.

There is a way, however, to minimize the impact of misleading advertisement, but you would need to wait for a couple of more paragraphs to learn that way.

There is also a middle-ground solution. Since a Facebook's algorithm calculates which add will be the best fit for a given person, it also calculates which add will be the worst, the opposite of the best. Adopt a law that would force Facebook – and ALL advertisers – presenting adds in pairs – the one that is the best fit and the other one that is the opposite. Simple!

Social media is new media, but it is just one of many media. All major countries have been using media to influence politics in other countries. Facebook is not the first in this business. The question is – who does a better job? And – why?

In 2016 Russians outplayed the U.S. intelligence services. And whose fault is that?

Why Did Russian Cyber Forces Beat their U.S. Adversaries in 2016?

Whose fault is that millions of Americans are susceptible to trivial lies, cannot separate truth from fiction, ignorant about so many scientific facts? Despite billions of dollars spent on “reforming” education (Where did all that money go? Definitely, Education Reform Needs a New Paradigm).

Defending democracy is NOT Facebook’s responsivity, and we have to thank Mark for doing what he’s already doing to keep the content clearer – he does NOT have to do it.

Of course, lawmakers could adopt a law that would force Facebook to do … - not sure exactly what energetic Alexandria would like to make Facebook to do, but let’s assume – it happened, the law is adopted.

Making Facebook a scapegoat may help gain popularity (following Trump, Alexandria?) but it has nothing to do with the roots of the problem.

Facebook helped to realize that there is an issue of media platforms enabling, or allowing, or even promoting content that is basically deliberately designed lies.

This is the issue – what do to with such a content?

What to do with deliberately designed lies in the media?

But this question is evidently too difficult for Alexandria to think of, or to ask (this is one more of my shots at her advisers – who are populistic illiterates in economics and politics).

What Is Wrong With Socialism. Really

The dilemma is obvious, Alexandria, – how to preserve free speech but not to install censorship?

Self- censorship, or in general self-policing will never work. That is why government needs a police, and a law, and jails, and prisons, and courts.

And instead of worrying about one company with relatively friendly management, let’s worry about many companies with who knows what management.

Well, look at the legal system – it tells us what could be done. For the first draft, just take all that structure and add to each element one word – media.

“Media police”, “media arbitrage”, “media court” – independent structures where professional factcheckers make a conclusion on the content and advise platforms to mark that content as inappropriate, misleading, 68 % fictional, PG-L (people guidance-lies), etc., or to remove it. Of course, the authors could appeal that marking or the removal. Etc., etc. – anyone who is familiar with the legal system (say – a lawmaker) should get my drift.

No? Ask me for details.

Could it be done?

How much would it cost?

Who talks about money when democracy is at stake?


P.S. If reading this piece makes you think that I sympathize Republicans:
1. check your logic
2. check these posts

American Republicans are just Russian Bolsheviks!
Disinformation - The New Weapon Of Republicans
Peering through the fog of brainwashing