The true mystery of quantum mechanics.

The true mystery of quantum mechanics 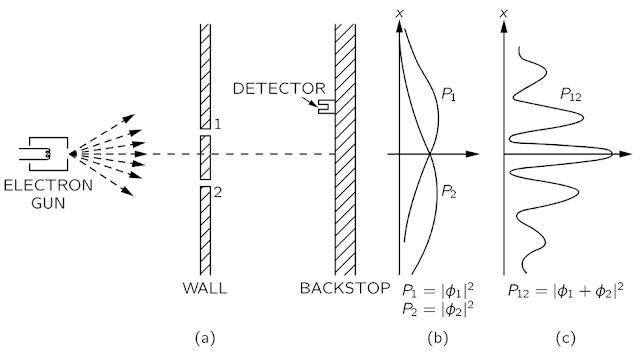 In all known experiments, all 100 % of them conducted to this day for about a century, all quantum objects have been revealing themselves as objects localized in space, i.e. as particles.

The most common examples of such experiments are:
the photoelectric effect,
the Compton’s scattering,
the Rutherford experiment (and all other collision experiments),
mass-spectrometry (including trajectory visualizing techniques like a cloud chamber),
counting techniques (e.g. a Geiger counter, a scintillation counter).

That is why each existing quantum object is called “a particle” (with a specific name – an electron, a proton, a photon, etc.).

The most puzzling feature of those particles is that even though they exist and exhibit themselves as particles, they behave in a way similar to the behavior of classical waves, e.g. the waves on a surface of water.

And yet, in order to explain all know experiments scientists had to treat quantum objects in a very contradictory way – like particles and like waves – at the same time.

For about a century, this “contradiction” has been the source of deep confusions and intense discussions.

Those discussions had led to several famous word-tags, such as:
The Schrödinger’s cat,
Wave-particle duality,
The uncertainty principle,
A wave-function collapse,
and also, to one of the most discussed quantum thought experiments: a double-slit electron diffraction.

Since I already have publications on those matters, I forward readers to this page.

I would recommend to start from:

Since all those pieces were a reaction to something I read, they may have similar parts, as well as ideas unique to that particular piece.

Here I just want to add two short notes – one on a wave-function collapse, and another one on the double-slit experiment.

I. A standard textbook on quantum mechanics describes two types of evolution of a wave function.

This is a very common view shared by many physicists: “In general, quantum systems exist in superpositions of those basis states that most closely correspond to classical descriptions, and, in the absence of measurement, evolve according to the Schrödinger equation. However, when a measurement is made, the wave function collapses—from an observer's perspective—to just one of the basis states, and the property being measured uniquely acquires the eigenvalue of that particular state. After the collapse, the system again evolves according to the Schrödinger equation.”

This is a notable fact.

Physicists do not have different interpretations of the classical mechanics, or classical electrodynamics. They even agree on the meaning of the special and general relativity theories.

But when they talk about quantum mechanics – they are divided.

My view on the so-called wave-function collapse is simple – it does not exist. The wave function always evolves according to the Schrödinger’s equation, but when a quantum object interacts with a large classical system the equation is simply too complicated for scientists to solve, or even analyze – using current mathematical tools. For example, a problem with three electrons orbiting a heavy nucleolus is already borderline complicated. An act of  a measurement – as an act of an interaction between a quantum and a classical systems – is much more complicated than that. And physicists cover up their inability to solve the problem of measurements by invoking a miracle called “a collapse”.

There is no such thing as “a discontinuous evolution”. There is evolution that is too yet difficult to be analyzed.

II. One of the premises of a double-slit electron diffraction experiment is that after traveling through the slits (in any way that fits the view of an author) they do not travel using a certain path, but reach the screen via many possible paths, and for each path there is a number that is called “the probability amplitude for an electron for “choosing” that path”. And the probability for an electron to get from point A (e.g. the slit #1) to point B (e.g. a given location on a screen) is based on the sum of all probability amplitudes for all possible paths leaving point A and arriving at point B.

This picture leads to a clear and robust mathematical description, called “path integrals” – one of the most fundamental mathematical instruments used in all quantum theories.

If explains all known experiments.

The only problem with it – it contradicts the nature of the experiment used for its own development.

Electron diffraction exists. Experiments show it. those experiments have become so routine, there is a lab on that.

And yet, the notion that electrons can travel via different paths is wrong.

It is not easy to see the path of those electrons, what we see is the interference pattern on a fluorescent screen.

But we can use a robust analogy to visualize what would we see if we could see the trajectories of those diffracted electrons.

That analogy is based on the original similarity between particles and waves, or, more specifically, between quantum particles and light waves.

At the dawn of the quantum mechanics, light waves were used as a means for understanding wave-like behavior of electrons, and other quantum particles.

But why don’t we use this similarity backwards?

That was the idea the brought the Nobel Prize to Albert Einstein.

Let’s use this similarity again.

And that way does NOT show many possible paths – not at all!

In fact, what we see in a very standard diffraction experiment is a set of several specific trajectories.

In reality, an actual experiments is much simpler and clearer when it is done with a diffraction grating (optical – for photons, or crystalloid – for electrons).

When photons travel through a diffraction grating they travel along a small number of clear paths. It is impossible to predict which path will be “selected” by which photon, but we do NOT see photons traveling in a cloud that “collapses” when that cloud reaches a screen (again – no “wave-function collapse”!).

This pictures shows an example of those trajectories (here is a short video). 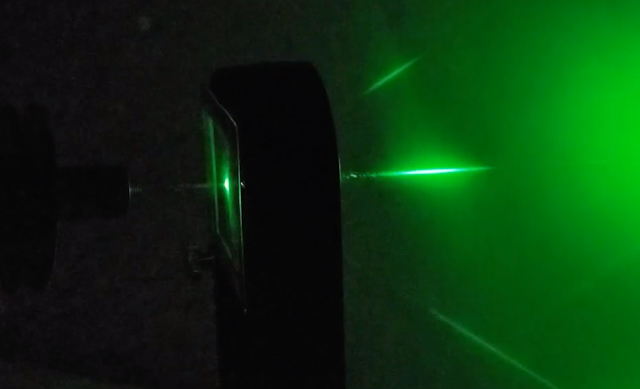 I am sure, a similar experiment with electrons traveling through a cloud chamber would show a similar picture.
This picture proves that the model of many different paths for an electron to travel from the grating (or slits) to the screen is simply wrong – despite the fact that it mathematically correctly describes the probability to fins a particle at a given location on a screen.

How can it be that a model that contradicts the physical nature of a process (traveling toward a screen), also provide correct mathematical description of the results of that process (arriving at a screen)?

There is no answer to this question.

To this day – now one knows why quantum mechanics works so well.

This experiment also shows a common methodological misconception – namely, that quantum particles travel according to the wave function provided by the solution of a Schrödinger’s equation with the given potential energy.

This experiment also illuminates one of the most famous mysteries of the double-slit diffraction experiment – how do electrons or photons get through the slits? Because the way they get thought the slits (or a grating) prescribes their future behavior – particularly, the path they travel through to a screen. For example, in the picture, we see that each photon “selects” one of the three paths, the probability to travel along a different path is zero (or almost zero).

We have three possibilities to describe the behavior of particles in this experiments, and the next one is even worse than the previous one.

(A) Particles “learn” what path they have choose when they interact with the grating (or slits) and then they travel along that chosen path. If that is a case, then a particle should “learn” its path even if there is only one slit! BTW: a fact escaping the mind of an every single author discussing the double-slit electron diffraction experiment.

A single-slit diffraction is well known for light, and it should be observed for electrons and other quantum particles, as well. But the explanation should be based on the solution of a Schrödinger’s equation for a particle interaction with a large classical object, and as we know from part II, no one yet knows how to do that (even for one slit!). Plus, this would negate the basis for the path-integral approach – if everything is “decided” at the beginning of each path (i.e. at the end of the particle–grating/slit interaction) then for each path its probability is set before that path begins.

(B) Particles “learn” what path they have to choose based on the whole system – that includes the grating (slits, a slit) and a screen. Clearly, this is even more complicated problem. The way around is to ignore the particle–grating/slit interaction and invoke the path-integral approach. But to explain how a far located screen affects the “choice” of a path we would run into a non-locality, or a faster-than-light interactions.

(C) In addition to the mystery of “learning the path”, particles may be able to “jump” from one path onto another, and back. That would definitely lead to a non-locality and a faster-than-light interactions.

This experiment demonstrates that the real mystery of quantum mechanics is not “how do  electrons travel through two slits at the same time?” (they don’t) but “how do electrons “chose” their path?”