Is Artificial Intelligence Already Actual Intelligence?
Recently one can read in many papers that robots finally become almost as smart as humans, and the era of humans is beginning to end.
For example, Scott Santens writes in Boston Globe: “Robots will take your job”.
(find it at http://www.bostonglobe.com/ideas/2016/02/24/robots-will-take-your-job/5lXtKomQ7uQBEzTJOXT7YO/story.html     or
at  https://medium.com/basic-income/deep-learning-is-going-to-teach-us-all-the-lesson-of-our-lives-jobs-are-for-machines-7c6442e37a49#.sc4kwf9s1)
Or, Emmanuel Marot writes: “Robot CEO: Your next boss could run on code” (find it at
http://venturebeat.com/2016/03/20/robot-ceo-your-next-boss-could-run-on-code/
Now Paul Allen wants to dissect a brain to make an artificial one.
It is amazing to see how advances in AI make public think that AI is already almost the same as I (Intelligence).
Yes, the progress in AI is huge!
But so far nothing achieved in this field shows actual intelligence, a.k.a. intellect.
An old Russian but appropriate joke comes to mind.
Researches study the development of intellectual abilities in monkeys. They designed a cage with a tree and hanged a banana on a branch to keep the banana high enough. Monkey enters the cage and sees the banana. He tries to jump but the banana is too high. He tries to clime the tree, but it is covered with plastic so the monkey just slides back. Monkey looks around and sees a stick. He takes the stick and hit the banana down. Success! Researchers are preparing the cage for the new run; they place a new banana on the tree. Suddenly a hungry physics graduate gets in the cage. He sees banana. He jumps, but the banana is too high. He tries to clime the tree but slides back. He starts to shake the tree, but the banana holds tightly to the branch. He keeps shaking the tree. Nothing happens. Finally researches tell the guy via an intercom: “Hey, take a second, think it through.” “What to think about”, the guy says, “it is simple - just shake and shake hard”. 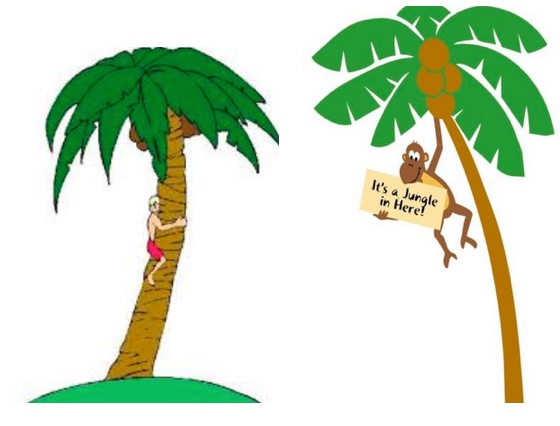 This joke helps to make a clear difference between an intelligent action and the one that is not.
Almost all authors talk about self-driving cars, or a robot that can walk and “talk”, or the three famous AIs, Deep Blue, Watson, and AlphaGo because they won in chess, Jeopardy and Go. Keep in mind, that all these AIs have been trained on using a vast set of previously uploaded information. The work they do is not really cognitive, it is routine. Of course, it is a highly performed routine work, but still – routine. It is impressive, but it could never have been done without advances in the amount of trivial operations a computer can make every second. When trying to separate a “routine” work from a “non-routine” work (meaning “intelligent”) people say that a routine work is the one done by body, and a cognitive work is the one which mostly requires our brain – but that is just plain wrong. Any work, or any action in general, requires functioning brain (that is true for all animals, including humans). The difference is what kind of problems does the brain solve when functioning.
There is a lot of routine work a brain does every day, or even every minute. However, nowadays we need to reassess the meaning of the term “routine”; it is not just something repetitive, it is also something that can be done by “routinely” checking a vast amount of data against a set of given criteria. No doubt a computer can do this kind of a routine work much faster than a human, but that does not make it more intelligent than a human – just faster.
Unfortunately, following AI promoters, public also get a deviated impression of what true intelligence is. Many think that memorizing lots of facts and quickly answering any question from an encyclopedia is the sign of intelligence.
The purpose, the missions, the central ability, the most important feature, and the signature sign of an intellect (a.k.a. intelligence) is an ability to solve problems. If we want to broad this definition of an intellect, we should say that the central ability of an intellect is an ability to self-teach, to self-propel individual knowledge generation, usually via generating a solution to a problem which has not been solved before (hence, the solution has not been stored in the memory and could not be found be a simple search, even via a very deep search, and the action solving a problem at hand could not be previously trained). If we have to select a single action which indicates the level of intelligence it will be making a decision. Simple decisions do not require much of thinking. Although today the term “simple” includes decisions which can be made based on a fast analysis of a large amount of data, as long as the parameters and values are well established and well prepared. Complicated decisions are synonymous to not trivial decisions, which often come spontaneously, as an insight. Spontaneity means that an action has not been trained before and it requires taking a step outside of the previously trained actions, and it has to happen here and now. No robot can do this so far.
Yes, a robot can recognize our face and voice, can get up if pushed down, can perform commands – but so can a monkey, or a dog. Some dogs might show a very smart behavior, but an intelligent dog does not exist.
A brain is just a biological foundation for intelligence, but learning from an intelligent teacher is the source and the roots of intelligence. You can try to train a monkey, but it will not learn how to solve physics problems. On the other hand, you can find a human child razed by monkeys and his perfectly human brain will not be able to show any sign of a high intelligence.
So, how will we know when AI is truly I (Intelligence)?
Another old Russian joke (a.k.a. an anecdote!) comes to mind.
A young math teacher enters the teacher lounge and swears: “My students are so stupid. I explained them a theorem, they did not get it. I explained another time. Still did not get. I explained the third time. I GOT IT! They still didn't”
(FYI: who is acting stupid in this joke?).
There is a reason people say “if you really want to understand something, teach it to someone”. Teaching is a sign of a high intelligence. Of course, it needs to be a true teaching, but not just routine training of repetitive actions. Animals also teach their cubs to live, to hunt. Many of the current “teaching” software” do not go farther than an animal-type intelligence; they train a student in a way a trainer trains an animal do tricks, but no more.
Let’s stress one more time: the key ability of an intellect is not an ability to walk, it is not an ability to talk, it is an ability to solve problems. And so far, the most powerful problem-solving instrument invented by the nature is a human brain. So, what every AI expert should do is to watch what problems, in what order and how a human brain learns to solve.
That means a simple thing, AI experts need to map a problem-solving evolution of a growing human, from a baby (problems to solve: reach, touch, recognize, walk, etc.), to … well, Albert Einstein!
At first a robot should learn how to solve any problem from a standard physics textbook; then a robot should be able to tutor a single student how to solve physics problems, and then, when a robot can replace a high school physics teacher, I will agree that finally AI has become I (Intelligence); but so far no company in the world (NO COMPANY IN THE WORLD) works on this (not "sexy", I guess, or too difficult, or both).