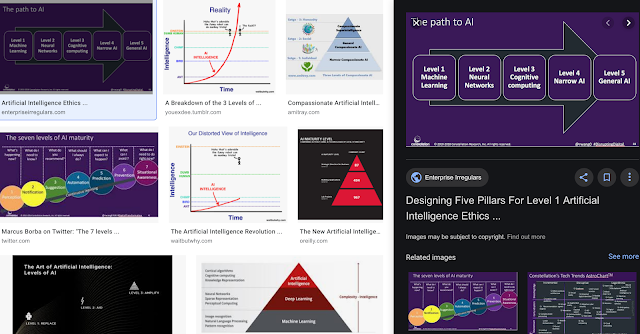 This is the continuation of the previous post "The True Meaning of AI". To read "Relax, the rial AI is no coming any soon" lick here.

All what currently is happening in the field of AI is a simple (but not trivial) pursuit of the best model of an elementary neural network (or the best elementary model of a neural network). It starts from a proposition of a model of an artificial neuron ("an atom" of a network). Then a network is being modeled using specific software and hardware. Of course, they (software and hardware) should be developed in conjunction with the development of the model of the network. Specific interfaces and sensory inputs are being developed to establish the stream/flow of data into the network and out of it. And finally, one needs to develop effective training protocols to train the network to do what it is supposed to do.
Currently there are no standards or criteria that could be used to compare different approaches and measure/rank different models in their entirety or by their components (a neuron, a net, software, hardware, sensors, interfaces, training protocols).
Currently, the race for the best AI is simply the race between the investors of all sorts in the amount of money they give away to anyone who says two magic words "artificial intelligence" in hope that those guys will stumble upon the best combination of the all AI ingredients.
But no matter what all and any AI professionals say, there is no single model of a neural network that possesses an actual intelligence.
People think that intelligence means an ability to think. But no one gives an operational definition of neither intelligence nor thinking.
Without such a definition anyone can imply any meaning and call intelligent anything one wants - e.g. a mouse crawling through a maze, or a monkey using a stick to knock down a banana.
This is exactly the type of intelligence all AI teams/groups/ institutions/ companies are developing today and for decades to come.
So, any discussion about "ethical AI", or robots taking over the humanity is just a publicity stunt.
What AI means today is "animal intelligence" by its level, and "algorithmic intelligence" by its structure and function. No more.
"Animal intelligence" represents the lowest level of a brain activity. It represents a set of built-in stimulus-reaction combinations coupled with a certain volume of empty memory that allows to grow the original set to a certain level. However, the activities of the host will never go beyond a stimulus-reaction combination. All stimuli have the source inside or outside of the body but not inside of the brain.
Animal intelligence has two main sublevels; at the higher level an action of a host can be a reaction to a stimulus coming out from another animal - i.e. it includes animal communication.
Human intelligence includes internal communication - when a host can react to a stimulus coming out from the host's brain (directly or via initial articulation of the audio signals).
Human intelligence also has two main sublevels; at the higher-level communication involves the development and the use of abstract symbols.
In general, the purpose, the mission of intelligence is giving to a host an ability to solve problems the host has never solved before - BTW, that is the physiological bases for a progress through an ability to initiate and sustain anti-entropic processes (the property that only living objects have).
This property is the cornerstone of my definition of intelligence.
However, if we stop just at this ability, we again will not be able to differentiate between animals (or even plants) and humans.
That is why my definition states that 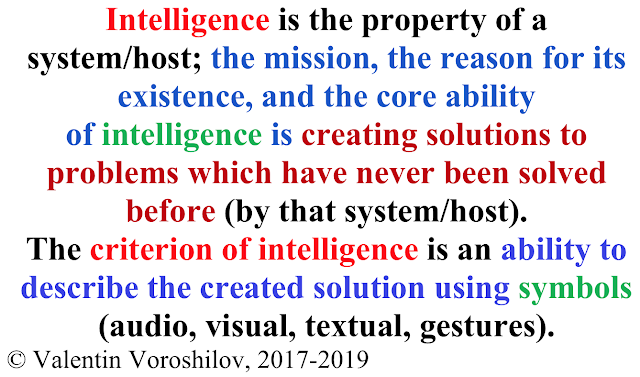 Naturally, thinking also has levels that correspond to the levels of intelligence.
However, calling "animal thinking" a "thinking" doesn't make much sense.
Mere reactions to primitive, or even advanced stimuli do not represent that ability people assume when they say "I think".
So, there are only two types of thinking; those that correspond to two types of human intelligence.
Neural activities in animals should be called by a different term (animalthinking ?)
The only level of intelligence any current AI demonstrates is the lowest level of animal intelligence - hence, no thinking is involved.
However, following Isaac Asimov, we can expect that in a distant, very very much distant, future we, humans, will develop AI with the highest level of human intelligence.
This expectation should make us to begin our preparations today!
But not by talking about "ethical AI". That's just BS.
Any intelligent system acts based on rules it learns from the culture it grows up in.
This culture can be provided by the members of a tribe over a period of years, or through a quick intake of prepared information (using artificial channels for communication).
Hence, any intelligent system - natural or artificial - must be treated in exactly same way - the way all intelligent subjects are treated right now. If we want that future robots behaved humanely, first we need to make sure that all humans behave in the same way.
BTW: the rules are here, well known, and have been known for thousands of years - but look around.
What everyone is missing is the fact that highly intelligent robots may (and most probably) act in the same way highly intelligent people act today toward everyone else - i.e. with condescending tolerance.
Imagine billions of poorly educated people and a thin layer of intellectuals - natural and artificial. Who do you think will prefer communicate with whom?
That's why the most important question of "ethical AI" is how to make ALL humans highly educated. And in that future "highly educated" will not mean "knowledgeable " or "with advanced erudition" because no human will be able to beat a robot at memorizing and quickly retrieving facts. "Knowledge economy" will be replaced by "thinking economy". And the discussion of "knowledge economy" will become obsolete relatively soon. How to teach ALL people think - this is the really important discussion of the future that includes highly intelligent robots.
But this discussion is not "hot" enough for our futurists, venture capitalists, philanthropists, politicians, or even educators.
Thanks Universe, I will not live long enough to see the consequences.
And: Thank you, World,  or our existence.
(C) Valentin Voroshilov, August 27, 2019 (Moscow to Zurich)
Steeling ideas from this piece without giving a credit is frowned upon.
Appendix I
When we think - do we know that we think? Do we feel how we think? Do think about how we think while we think? Most people don't. But not because they can't. Because no one told then they can; no one trained them to do that. Any healthy person can stand on one leg, close eyes and touch the nose with an index finger. Everyone is usually aware of the state of the parts of his/her body. The same state of awareness about our feeling, and even about our thinking we can achieve by practicing in that awareness. That ability is called introspection. If you practice enough, you can feel your reactions and then your thoughts to them. For example, if someone asks you "Would you do that?" your reaction "NO!" comes from one part of your brain, but then the explanation "Why? This is why" is being generated in another part of it - an NO AI system does that, and will not be able for a very long time.
Only humans can have ability to introspect. No animal can achieve introspection (they don't even have a "self-spection" - do not recognize themselves in a mirror). And not a single AI professional has a slightest how to model this ability. They may develop an AI that acts like a mouse, but the road to the human-level AI will take decades. Any current AI is farther from a human intelligence then a bicycle from a Starship Mk 1. When a baby is born his/her intellect is no different from of a newly born chimp. Animal stage ends a when child begins recognize himself/herself. Only after self-awareness is achieved the human-level intellect begins its development. No AI has self-awareness, and no AI professional has any idea how to achieve it. And will not know - for a very long time. Period. So all buzz about AI is just a buzz.
Imagine a platoon of strong and healthy but intellectually underdeveloped (animal-stage) solder trained to be killers. This type of machinery can be developed within a decade or so. AI brain - dumb like a doorknob but obedient - can be installed into a robot, tank, missile, drone. But that's that. Elon Musk can entertain the idea of a scary AI taking over the world, but that 's all it is - entertainment.
Homework questions:
How to assess different levels of thinking?
How to advance different levels of thinking?
Why school education is so bad at advancing thinking, even at the low level?
How to reform schools to help them with advancing ability to think?
Why billions of dollars spent on education reform didn't make any difference?
Why philanthropy doesn't help education?
How poor education affects politics and economy?

This publication provides a reasonable description of the current state of AI
Appendix II
AI has the same levels as natural hosts of intelligence.
Appendix III
Starting a car with a push of a button - a process that is simple but not trivial.
Appendix IV
On 09/05 The NYT wrote how happy OpenAI and all AI community are because - FINALLY! - AI passed an 8th-grader test. 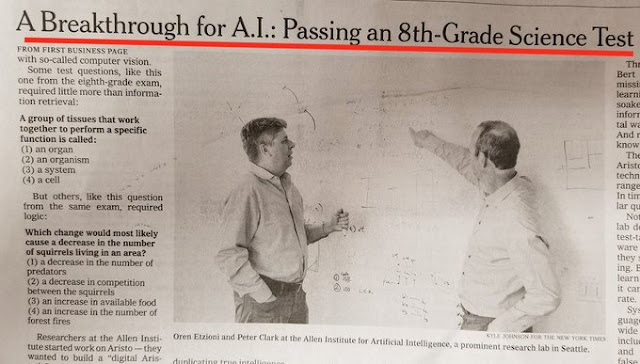 Do you know what that means?
It means, that ALL current AI systems that are being promoted to businesses are NOT smarter than an 8th-grader.
Plain and simple.
That's EXACTLY what I wrote in
The new stage of the race for AI domination AI
quote: "AI is just an intern with thousand hands and eyes, and a brain strong just enough to learn some patterns".
Well, I actually gave it an even higher level of "intelligence" - "an intern".
Any business thinking about using AI needs to know that he/she will "hire" and employ an equivalent of an 8th-grader, or maybe of a dozen of them.