America is in a dreadful state. Has been for awhile.

There is one psychological trait millions of Americans share that greatly affects the American progress - in a highly negative way.

That common psychological trait is a hatred toward standards.

Economic and social progress is impossible without standardization.

Standardization means a unification of meanings and/or actions.

This process is always based on a gradual building of a consensus (i.e. a standard of thinking) regarding what things or words or symbols mean, or what steps or actions should be used for achieving a specific (commonly accepted – as another consensus) goal, and in what order those steps should be taken.

Without standardization (of the meaning of sounds and symbols) there would be no languages, and no translations.

Without standardization (of the measure of a value) there would be no money, no currency, no currency exchange.

Standardization in science and engineering has led to the development of metrology and to the designing of the Hadron Collider and the MKS.

Standardization of actions has led to the development of the conveyor belt, of the logistics, of the LASIK.

Every element of a human progress is based on certain standardization.

A hatred towards standardization leads to a strong social force against progress.

And yet millions of Americans hate standards.

They hate this word, and they fight this word every time they meet it, they hear it, they read it.

Because every time when they meet it, they hear it, they read it –  they react to it like Pavlov’s dog reacts to a whistle – i.e. without thinking.

That, of course, is a complete nonsense.

America is the country that has been known for the rule of law (at least until recently). The rule of law is what every American is proud of and bragging about.

By because many Americans are very poorly educated, they simply cannot connect in their minds such concepts like “standards”, “freedom”, “rules”, and “laws”.

And American ruling elite knows that, uses that for its own good, and makes sure it stays that way.

At least that part of the American ruling elite that recently acquitted Donald Trump (they call themselves “conservatives”).

And as I've been writing before, the opposite part of the American ruling elite is simply not smart enough, and not bold enough to offer any countermeasures.

The hatred towards standards has been and is being deliberately nurtured and propagated by a certain part of American ruling elite (“conservatives”).

Every time when a certain standard, in a form of a regulation, is proposed, media controlled by so called “conservatives” starts brainwashing the population.

“We don't need that regulation, proposed by the enemies of our liberty, who want to take our freedom of doing wherever we want to do!”

They do not understand that the abscess of standards is a standard.

They do not understand that the absence of a specific regulation only means that another regulation is being applied (often – quietly, without an explicit indication). And those regulations tend to favor the very people who regulate those standards and regulations – the rich and already powerful.

The examples are numerous:

The absence of reliable public transportation.

And for example, a much simple example. Many apartment buildings in America are porous. If people in the apartment below yours smoke or cook you smell of that. That happens because when running vertical pipes and lines and ducts people who built the building did not put any anti-fume insulation between the floors. Why? The asnwer is GREED. They save money that way. But why can they do that? Because America has NO standards for fume-insulation. America has NO standards for air condition in living areas. Why? The asnwer is again the same - GREED (more on this in “Greed - the cancer of America”).

BTW: the absence of a common ideology is also a fake. The common ideology all those “conservatives” share and propel is dogmatism, usually in a form of a religion (Protestantism or Catholicism).

Dogmatism demands taking “the elders” by their word, no doubts, blind following. And that works well on poor poorly educated Americans.

So-called “progressives” tend to administer “atheism”, but they do not really know what it is, they just reduce it to “the absence of God”.

Of course, there is a reason that the hatred towards standards is so widespread.

The #1 reason is the low educational level of the masses. And there are two more fundamental reasons besides the first one.

Those two reasons can be stated in the form of two general laws:

1) Any idea, any approach when it is taken to its extreme becomes its own opposite.

2) Any good idea can be compromised by its poor implementation.

Simply saying – nothing is perfect, not even a seemingly perfect idea (“communism”, “capitalism”, “paradise”); every idea has its own limits, and beyond those limits it starts working against itself, against its own idea.

The idea of standards and standardization has been taken to its extreme and was compromised by its poor implementation.

In politics, taking the idea of standardization to its extreme leads to a dictatorship.

Such examples of “bad standardization” are being used to smear the whole idea of it.

It's like finding one bad apple and saying – we have to dump the whole harvest!

This is why the hatred towards standards, rules, laws is dragging America down. It's like a chain on its feet. It builds a psychological barrier to developing new social solutions to the challenges America faces.

The evolution of every complex and open system is, in a way, similar to the evolution from an amoeba to a human body. This evolution is simply impossible without a certain processes of standardization.

For example – the development of a standard code for encrypting all the information about a system (a body) in a single molecule (BTW: a DNA).

And for a society, those standards have a name – we call them “laws”.

American individualism has become and America egoism: “I'm a considerate individual” has become “I don't care about anybody else but me”.

When more and more people decide not to follow laws – that really demonstrates that a society is approaching a phase-transition state; it's not about people, it's about the fact that the current laws do not satisfy anymore the majority of people, and, hence, have to be replaced, or at least adjusted.

This is the phase we are observing now in America, and all around the world.

In this phase, fighting against laws/regulations/standards is simply not enough – it's not going to do any good.

The fight needs to be for new laws/rules/regulations/standards.

But the new laws/rules/regulations/standards require new people who have a new vision, new knowledge, new capabilities and new ideas, and so far these people are simply absent.

This is why, so far, Americans keep killing their own progress.

They do it by rejecting an idea of standards (of living, for example), and by following the standard politics of the past.

A good illustration of the point: during the epidemic wearing a mask on an airplane must be a standard rule, but it isn't. 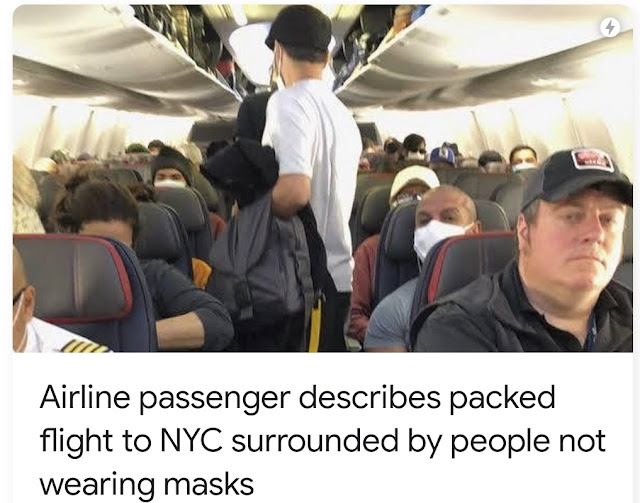