Who will train our “artificial puppies”? But more importantly – who will train the trainers? Two questions which will haunt AI developers very soon.


Please, note:
So far my "interventions" into the field of AI development have been sporadic, and the full picture comes with the reading of all major pieces on the matter: e.g.

On The Definition of AI
Relax! The real AI is Not Coming Any Soon!
Applying AI to Study Learning And Teaching Practices

What will happen to a puppy when it grows up?
The answer to this question depends on how the puppy will be raised.
Its physical health depends on the food and exercises his owner will be providing on the everyday basis. But it's skills, what it will be able to do, what commands will it understand and execute and how good it will be on doing that, depends solely on how good will be the job the trainer will be doing when the puppy will be growing up. The best trainers can make animals do amazing things. Dogs can sniff out drugs, find people covered by a snow avalanche, recognize a gun and bite the hand which holds it. Everyone who was in a circus knows that animals can do things which even some people cannot do, for example ride a barrel. 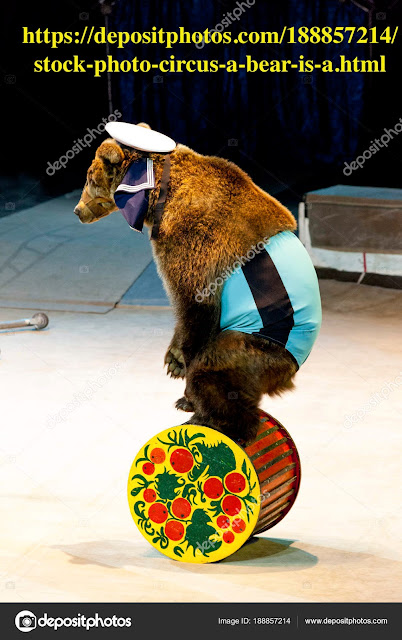 And if you cannot do it, and a trainer is not good,
your AI will be useless for you.
The fact that in order to be useful AI must be properly trained is hidden between the lines in publications saying, paraphrasing, that “it is not just about the amount of data, it is about how the data are structured”. And who will be structuring your data for you? AI professionals are not experts in your field, they are experts in developing pattern recognition systems, but that’s that. And even if AI will recognize some patterns in your data, how would you know that those patterns are at the core of your company’s functioning? For example, for a long time based on the visible patterns people thought that the Earth was flat and the Sun was moving about it.
Those are just a few of the important questions to everyone who is considering to use AI for their business.
AI developers will NOT be able to answer those questions.
Professionals in knowledge production, science development, and experts in human intelligence WILL.
In order to make a transition from an academic study to a mass use of AI, the AI field needs a new type of professionals, who will be able to bridge AI developers and consumers; professionals, who need to be able to:
1. install a specific AI system as a part of the company’s workflow (but do not need to know how to design it);
2. train a specific AI system;
3. elicit from the customer the vision of the goals and criteria set for the proper functioning of a specific AI system;
4. design the proper process and structure for collecting appropriate data;
5. train the customer in using a specific AI system.
Such professionals do not need to be proficient in coding, or in AI development in general.
The core abilities of such a professional are an ability to analyze, and an ability to teach (those abilities are necessary, but not sufficient).
The difference between a good “AI training representative” and a bad one is very similar to the difference between a good teacher and a bad one.
When in action ("in a class in front of students") they look very similar, but the results are very different.
AI developers need to:
1. begin a search for that type of people, and
2. begin designing the new profession.
The sooner the new profession will become a professional field, the sooner and broader will AI be adopted in all areas of economy.
Top AI developers/promoters reported to the Congress that AHLI will not be achieved at least for 20 more years. Despite the fact that the need for professional AI trainers will grow much faster than advances in the development of human level AI, professionals in AI field do not pay as much attention to AI training as to, say, ethics.
For everyone who is struggling to figure out what AI could do for his/her business, I can help with this simple approach. Imagine you can hire as many interns as you want. They don't know much, but you can train them to do some simple but tedious job. Imagine how would you train those interns to do that job. Here it is - this job can be done by AI trained as an intern. You're welcome!
And finally, a word to investors. AI investors need to be careful when considering handing their money to a new startup which has "AI" in its title. Recently "blockchain" has become a buzzword. A company can change its name by including "blockchain" in it, and investors are ready to put in it their money even if the actual business run by the company has nothing to do with using a blockchain technology (but may "explore an opportunity to use it", like "Long Island Iced Tea").

(from Barron's, March 19,2018)
A similar phenomenon seems happening with "AI". The best way to make a decision about an investment would be to hire an expert in AI who can audit the startup and clearly state: is AI indeed at the core of the company's business, how much of the company's workflow is relied on the use of AI technologies, could AI be replaced with a more traditional technical solution? 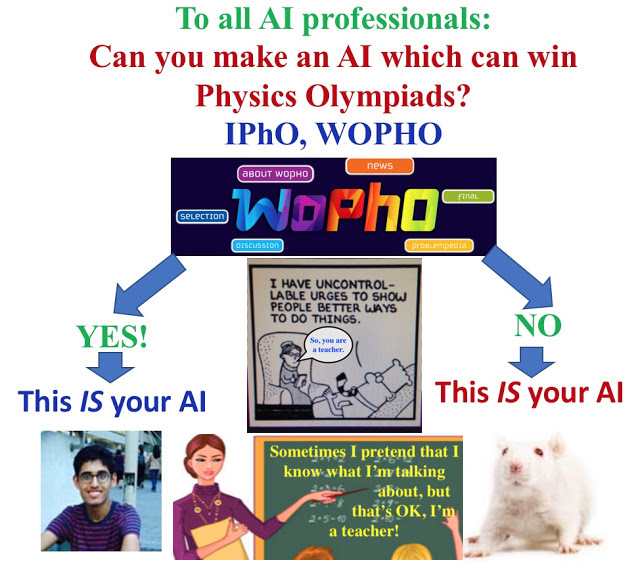 BTW: to my best knowledge, so far, no large company or a small startup takes on the challenge of developing AI which would be able to win a Physics Olympiad (theoretical part).
This just demonstrates how far AI yet from actual intelligence (although, such AI can be developed).
Table of content

To learn more about my professional experience:
Voices of My Students
“Backpack Full of Cash”: pointing at a problem without offering a solution
The Essentials of Teaching Science
By Dr. Valentin Voroshilov at April 20, 2018