Anti-Atheism; or The Struggle Between the God and Science.

Table of content
Anti-Atheism; or The Struggle Between the God and Science.

(the first piece on the matter: "What is the difference between science and religion?")
When people invoke God that only means people have reached the limit of their knowledge.
Phrases like “God knows why”, or “That's God's will”, or “That’s in the God’s hands” simply mean “I don't know”, “I have no idea why this is happening”, “I don't know what to do”, “I don’t know why did I do that?”.
The idea of God represents the awareness of people about the limits of their own knowledge. And the following frustration they feel and want to escape.
This awareness is as old as humans are.
At first people created an idea of spirits (demons, angels, trolls, …). Spirits lived around people: in a forest and in a lake, in trees and in caves, etc. Spirits were the governors of the forces of nature, they were responsible for a rain, for fire, for thunder, for the Sun, for fish and animals, and everything else what people could not control. Spirits were molded based on people who lived in a tribe, but stronger, more powerful, and always hungry (exactly like people who created them) – hence, for everything they were asked to do they always demanded some sacrifice.
The next after the next after the next … generation of spirits eventually has been replaced by gods who usually did not live around people any more (for example, they lived at the top of mountains, or in the ocean). Gods were stronger than spirits (do not confuse them with wizards, or sorcerers, …, who were also powerful, but came from people, following the line of shamans). In time Gods had “created” an internal hierarchy. Gods did what spirits did not do – they were competing with each other for power, deceiving each other, fighting with each other – exactly like people who created them.
But eventually someone very smart and wise asked - why having so many gods when one God can do exactly the same? That would make the whole story much easier. But more importantly, that would make the rituals simpler and more unified, hence better suited to a wider audience. And the first monotheistic religion was born. And then the second, and the third. Because people wanted to believe in the existence of a Superior Being.
Why do people want to believe in God?
Because people feel the need for an explanation for things happening around them and with them, and because people feel the need for guidance for their actions.
This need is genetically built into the human code.
Why?
Because that helps human species to survive, be fruitful and multiply. Because it brings some structure into human life which helps fighting chaos brought by the natural forces.
"God" fills up the gap between a reality
and the knowledge about that reality. 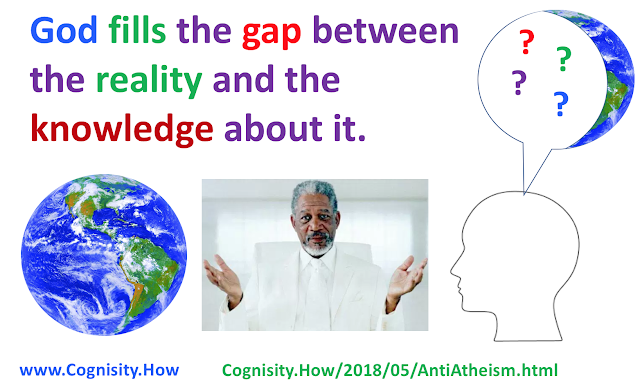 
To learn more about my professional experience:
The voices of my students


"The Backpack Full of Cash": pointing at a problem, not offering a solution