Join The Campaign!
Senator Sanders has made his mind - he will NOT run in 2020
The Manifesto of The 3d Force Movement
Join The Campaign!
“A spectre is haunting America – the spectre of … .”
Scott Greer’s Terrible understanding of John Oliver’s piece on slavery.
Make America Whole Again! The 3-D Force in politics.
"The True Role Of The Third Party In The U.S. In The Current Political Environment", or "What Do We Really Need From The First Truly Third Political Party?"
An Open Letter to Senator Bernie Sanders, Senator Elizabeth Warren, Senator Chuck Schumer, and Senator Al Franken
Can we curb gun violence?
To Mr. Nicholas Kristof, The Nye York Times Op-Ed Columnist
I am ... !
Are the political parties usable? That is a loaded question
For progressives Convergence seems yet elusive - but still possible
Who are the real wealth creators?
The worst birthday gift to Senator Sanders
Why Should the Democrats Support The 3-D Force?
When will the Democrats make the first step of the 12-step program (admitting!)? Seems - never!
Peering through the fog of brainwashing: the real reasons behind the conservative politics.
Ignoring sloppiness: a sign of tolerance or mismanagement? And how did it affect 2016 election.
“Being Polite” versus “Being Nice”; what is the difference for a debater?
Why did Hillary Clinton Lose the Race? Or. Conformism and Arrogance of The Establishment. And. What To Do Now?
a Short Letter to Jon Ossoff (the principles for moving the progressive agenda ahead)
Dear Senator Sanders, Thank you for your letter
What should really differ a “Progressive” from a “Conservative”?
DraftBernie and “People’s Party” is NOT the answer
Why I have NO Trust in Democrats
Michael Wilson v. Michael Moore
The Challenge for the Democrats - Stop Lagging, Start Attacking!
Do We See The Dusk Of America? That Depends On …
Democratic Party Leaders Have No Vision
To Mr. Zac Petkanas - DNC Trump War Room Director
Donna Brazile v. Trevor Noah
“To Senator Warren In preparation to 2017 Mass Dem State Convention
“A Sane America” vs. “An Insane America”; The Latter Has Won (so far)
A note on a connection between immigration and science
To everyone who has been emotionally attacked, called names, threatened, verbally degraded!

And this link   http://www.gomars.xyz/op.html  leads to even more post on the matter:
Bye-Bye The Pathetic Democratic Party! (one way or another)
Liberals! Stop living in a bubble!
What is wrong with being “neutral journalist”
Who will be the real President of the United States?
What Could Liberals Learn From Physics?
Intellectual stagnation, social conformism, and the crisis of logical communication.
Liberals, stop whining!
American Republicans are just Russian Bolsheviks!
The election is just over. What's now?
“A failure of imagination” has led to 11/08/2016.
Were Democrats Doomed, or There Was a Path to The Victory, and Does It Still Exist?
A mob revolution
To Nancy Pelosi

The mission of charter schools.

The mission of charter schools 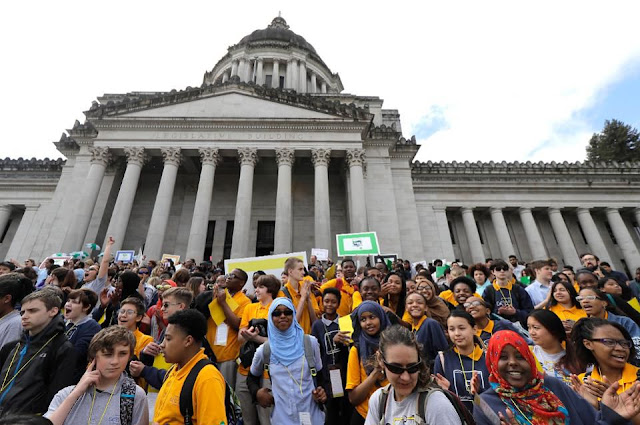 A recent post in Forbes (https://www.forbes.com/sites/emilylanghorne/2019/03/14/separating-fact-from-fiction-five-important-findings-about-the-nations-charter-school-landscape) reignites the debate about the mission of charter schools in America.
Foreword: Comments to some statements/"findings"

Meaning: Charter schools do not guaranty anymore the highest performance of their students. They will teach without interference from administration, but the results are - whatever.
2, 3, 4.

Meaning: No for-profit management, no ties with philanthropic organizations, so, charter schools become no different from any other public schools, except the freedom they want.
5.

The article is based on the report prepared by association which promotes charter schools.
Meaning: it is not a report, it is promotional booklet.
It's like asking Donald Trump to assess his own performance as the President. The result is obvious.
But if charter schools become less and less different from regular public schools and do not promise exceptional performance, what do they do, what are they need for? What is the mission of the charter schools?
The answer is in the next part of this post.
Here are some numbers: 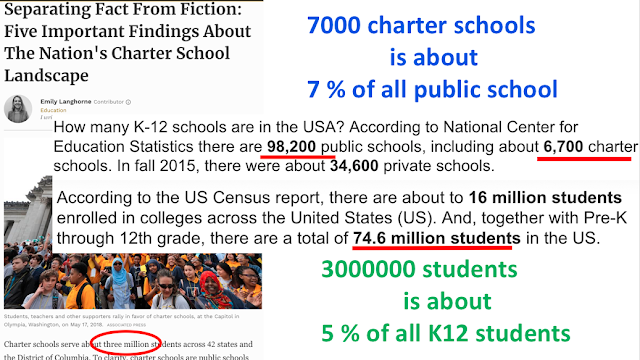 Thinking that a tiny portion of schools teaching a tiny portion of students would make an impact on the whole system of public education is a delusion.
Or a deliberate deception.
Even if all charters would perform at the perfect level - which is NOT a case.
So, if charter schools are NOT for reforming public education, what are they for?
In their current form, charter schools solve problems of some parents, some students, some politicians (to brag about), and some businessmen and businesswomen (to make money off education using politicians who brag about supporting education), but that's that.
There are two major types of charter schools:
1. where there are many students from poor families - those schools do not demonstrate performance better than a regular school and is being used as a many-making machine and a bragging tool;
2. where there are just a few students from poor families - those school are basically private schools for affluent families where parents do not want pay money for an actual private school.
So, the mission of charters schools - not as an idea but in practice - is to be a money-making/bragging tool, or a "public-private" school for mostly white students.

The systemic and systematic reformation needs a completely new paradigm: http://www.cognisity.how/2018/02/paradigm.html
And the first people who needs to think about it is teacher unions: https://www.cognisity.how/2018/10/unions.html
Otherwise, millions of dollars will join millions of dollars which have already entered someone's deep pockets - and that is the true mission of charter schools - but 95 % of American students and teachers will not feel any improvement.
The only statement we can make for sure from study charter schools is that a highly professional principal who gathers a team of highly professional teachers and staff, and has a significant budget can develop for students an efficient learning environment.
But any sane person finds it just obvious, doesn't s/he?
The real question - how can we make ALL schools be good schools?
It's doable, but it requires a very different type of thinking about education in general and teacher professional development in particular.

Disinformation – the new weapon of Republicans 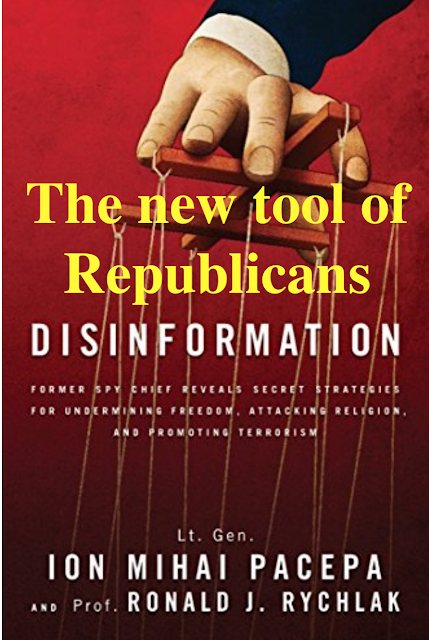 (this post was originally published on 07/22/2017 at www.the3dforce.us)
Two more posts on this topic: