The Full List of The Publications on The Methodology of Teaching Science
Table of Content /  List of Posts
A Map of Operationally Connected Categories
as an instrument for classifying physics problems
(and a basis for developing a universal standard for measuring learning outcomes of students taking physics courses;
a novel tool for measuring learning outcomes in physics).

(This paper was used as the core of a project presented to the NSF in the form of a proposal for The NSF 2026 Idea Machine; its content also was a part of IOP paper "Learning Aids For Students Taking Physics")

A shorter version of this paper was presented at 2016 AAPT-NES meeting (for slides, please visit http://www.teachology.xyz/prnes.htm or www.GoMars.xyz/prnes.pdf
or a short video).

Abstract
Currently there is no tool for measuring learning outcomes of students, which would be broadly accepted by teachers, schools and district officials, by parents, policymakers, and researchers. Educational standards cannot provide a basis for such a tool, since for an educator “a standard” means a verbal description of skills and knowledge which students should be able to demonstrate. The actual realization of the use of that verbal description has not been standardized.
In physics a standard (also called an etalon, or a prototype) is an actual object, or a feature of an object, accompanied by a specific procedure which allows comparing similar features carried by other objects with the standard one. The existence of such standards had allowed physics to  reach the status of a developed science and become a foundation for significant engineering and technological advances.
Educational research, though, in its current stage, cannot be assessed as a developed, but rather as a developing science. On of the main reasons for that is the absence of the scientific-type standard for measuring subject knowledge.
There is however an approach to standardization of measurement of physics knowledge similar to standardization of measurements in physics.
This approach is based on a specific technique used for classification physics problems. At the core of such classification is the use of graphs (in the sense of the graph theory, or nets, networks), such that:
1. every physical quantity represented by a vertex/node of a graph must have a numerical representation, i.e. has to be measurable (capable of being measured, i.e. there has to be a procedure leading g to a numerical value of the quantity represented by a vertex/node); and
2. every link between any to vertices must have an operational representation: i.e. for any quantity represented by a vertex, if its value is getting changed, and the values of all but one other quantities represented by other vertices connected to the changing one are being kept constant, the quantity represented by the remaining vertex linked to the changing one must change its value. 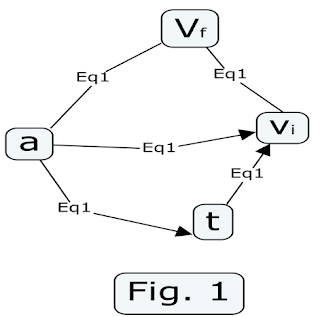 Each link of the graph in Fig. 1 represents the same connection/equation:

(the MOCC was drawn using CmapTools: http://cmap.ihmc.us/)
Table of content
Appendix I: Further applications of MOCCs
Physics knows how important visualization can be for its development. Teachers constantly tell students to start their problem-solving process with drawing a picture or a diagram. Invention of diagrammed approach to visualize mathematical structure of calculations in quantum electrodynamics via Feynman's diagrams had led to the Feynman's Nobel Prize.
Nowadays MOCCs represent the most accurate instrument for classification of physics problems and developing a tool for objective measuring learning outcomes of students taking physics courses. The same principle also can be used for developing an analogues tool for measuring learning outcomes of student taking any STEM course.
It is worth to note of the use of MOCCs as a pedagogical instrument. The visualization of logical connections between quantities helps students to grasp the logic of creating of the solution of a given problem. Some students develop a habit of using MOCC when study physics. MOCC also can be used as an end of a topic assignment, when students should use it to visualize all the important connections they have learned. Below is an example of such a MOCC developed by a high school student after topic “Direct Electric Current”. On the pedagogical use of MOCCs and other learning aids, please, visit http://www.cognisity.how/2018/04/LernAids.html.

All like problems have a MOCC with the same vertices but different links used to solve a problem. Each MOCC describes a set of like problems. Each like problem (in general – any problem) can be stated in a general (i.e. abstract) language which does not depend on the specific physical situation describe in the problem (click here for the example). A problem which is stated in a general language and which is like to all problems in a set of like problems is the root problem of the set; any specific problem in a set can be seen as a variation of the root problem.
A set of root problems can be used to describe desired level of learning outcomes of students.
I believe the time has come to create a coalition of individuals and institutions who would see the development of objective and universal tools for measuring learning outcomes in physics as an achievable goal.
The first step would be agreeing on the set of root problems and classification them based on the difficulty. We need a group of people who would collected all the problems from all available textbooks and routinely converted each problem into a root problem, draw a MOCC for each problem, calculated its difficulty.
All individual MOCCs combined together would represent the map of objective connections in physics as a field of a natural science.
This map could have been used to teach AI to solve physics problems in a way it uses geographical maps to “solve driving problems” (in addition with other learning tools this AI could replace eventually an average physics teacher). But for us MOCCs represent the most accurate instrument for classification of physics problems and the nucleus of the tool for measuring learning outcomes of students objectively and uniformly (i.e. comparably).
Table of content
Thank you for visiting,
Dr. Valentin Voroshilov
Education Advancement Professionals
GoMars.xyz